Could hydrogen cooling come back?

Cooling electrical machines with hydrogen gas (H2) is not a new topic. It is proven technology in large turbo-generators with almost a century of experience. Hydrogen is an explosive gas, and requires complicated systems around it. Therefore its use is currently limited to the very large power machines. However, future trend called the Hydrogen economy will bring hydrogen gas supply to many new applications. When the gas is already available, the question is: Could it be used as cooling medium in electrical machines?

In general, as a cooling medium hydrogen offers clear advantages over air. It has higher thermal conductivity and higher heat capacity, and it can be also pressurised. So the cooling will be more efficient. Furthermore, hydrogen is a very small molecule gas, so the machine has very low windage losses. This increases efficiency, and makes it possible to place the cooling fans on the shaft without excessive windage. Also, hydrogen cooling potentially improves reliability, because the winding heads would be free of moisture, dirt, and other contamination. 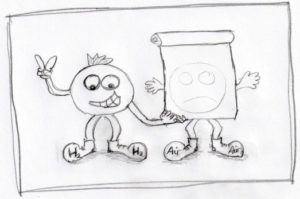 At the moment this is the case only with the largest generators. Could it be more frequent in the future?

Looking back how it all started

Let us sacrifice a few paragraphs to see how it all begun. Hydrogen cooling was introduced about a hundred years ago. In 1925, General Electric engineers Edgar Knowlton, Chester W. Rice, and E. H. Freiburghouse published a report on their test results [1]. Their article demonstrated the benefits of hydrogen gas cooling, and invalidated the highest risks. The motivation for hydrogen was to lower the windage, to increase the power by improved cooling, and to eliminate the risk of fire, because with hydrogen the insulation could not burn.

The last one may sound conflicting. We have seen pictures on the hydrogen-filled airship Hindenburg landing on a steel mooring mast in New Jersey in 1937. Something went wrong, the airship burst into flames, and eventually 36 people died [2]. However, electrical machines differ from the airship Hindenburg. Inside electrical machine frame, hydrogen indeed cannot burn. Knowlton, Rice and Freiburghouse demonstrated that if the hydrogen content in the gas is more than 65%, it is impossible to ignite. They also write that explosion was indeed the risk most frequently suspected by other people.

It appears when reading the old papers that fire was a much larger threat to electrical machines at the time than it is today. A small electrical fault in the winding head may set the coil insulation on fire. This could even happen without any observable electrical fault, as Knowlton, Rice and Freiburghouse write. Maybe this was due to frequent partial discharge activity and that the outermost insulation layer was often made of cotton, which may burn. Anyway, a small local fire in the winding head is not enough to initiate the automatic safety procedures that take the unit off the line. Forced air cooling brings plenty of oxygen into the flames, so the fire can spread, and damage the other coils as well. Furthermore, the steam turbine generators at the time were equipped with water injection pipes near the winding heads. Putting the fire out with water is almost as damaging to the insulating materials as the fire itself, so it is obvious that the operators wanted to prevent the fire event in the first place. Hydrogen cooling offered exactly that.

At the time, air cooling had another problem. Partial discharges initiated chemical reactions with air and insulating materials, which weakened the mechanical strength of insulation, hence causing erosion problems. The degradation was linked to the formation of ozone (O3), so with hydrogen it did not take place. These erosion problems were seen with varnished cotton cloth samples, but not with mica tape samples [1]. Today, it is written in text books, such as [3], that inorganic materials such as mica resist partial discharge activity much better than organic materials. This conclusion was not given by the first hydrogen-cooled machines, but by other research and testing carried out at the same time.

As the operators gained more experience, they observed that the hydrogen-cooled units had higher reliability than the air-cooled ones. Mr. Snell summarises in 1940 [4]: ”The life of the winding insulation is increased, due to the absence of moisture, oxygen, and dirt, and to the fact that corona damage is eliminated, in hydrogen-cooled machines.”

Knowlton, Rice and Freiburghouse [1] demonstrated the potential power increase. Their test machine was running at 2.4 MVA with air cooling, and at 3.2 MVA with hydrogen cooling. They conclude: “For the same operating temperature a steam turbine-driven generator of a given size will have a capacity at least 30 per cent greater when operated in hydrogen than when operated in air.” This >30% is an estimate for the 1920s machine with 1920s insulation, so one might wonder how realistic this value is.

A presentation by Dr. Juha Saari [5] as part of an Aalto University postgraduate course in 2005 provides another calculation approach, this time for a smaller and faster rotating, modern technology machine. He ends up with 32% higher output power when the cooling gas is changed to hydrogen and the volumetric flow maintained.

I also had to try. I took a high-speed machine design from one of our customers, and calculated it with our thermal calculation tools. The model was verified for air cooling. I changed the gas and maintained the volumetric cooling gas flow. With 3 bar of hydrogen, the power increase was 30%, and with 10 bar of hydrogen it was almost 40%.

Anyway, we should always keep in mind that air-cooled machines usually have considerable design margin. The operating point is well below the breakdown point, i.e. the theoretical maximum power. Therefore, the machine will be able to deliver higher power, if the temperatures can be kept under control.

Today, only the very largest machines use hydrogen cooling. Stone et. al. [3] define a limit of 300 MVA, above which hydrogen cooling makes commercial sense. This power level is used only in nuclear and coal power plants, and only with turbo-generators. Insulating materials have developed from the old days, and air-cooling is no longer as dangerous for the materials as it used to be. It seems that the hydrogen cooling is nowadays one of the last cards to be played on the machine design table.

The machine power increase is needed only when the machine size cannot be enlarged any more. With turbo-generators, there are no real size or weight limitations. The machine is conveniently lying on the concrete floor in the middle of a hall sized as an Olympic swimming stadium. But there are other limitations to physical size. There is a certain critical bearing span, exceeding which causes rotordynamics to get out of hands. The rotor outer diameter is limited by the maximum rotor tip speed the materials can withstand. When these dimensions – length and diameter – cannot be increased any longer, the focus is set on increasing the stator current density and improving cooling.

Few things have changed in the last one hundred years. Today, the installation cost of a hydrogen-cooled generator is presumably higher than that of an air-cooled one. Also, the insulation technology has taken major steps forward. The above-mentioned issues with corona and fire are nowadays mitigated by more advanced materials and insulation system design. However, even today the hydrogen cooling eliminates moisture, dirt, and contamination in the winding heads. Hence, the insulation lifetime is still increased, the difference just might be smaller than before.

Hydrogen economy applications in the future

The innovations for the Hydrogen economy bring new flavour to the soup. Hydrogen is proposed as an energy storage and fuel. It can be pumped into cavities in bedrock in the same manner as natural gas in the gas storage applications. It can be transported in pipelines just like natural gas, or in bottles like nitrogen or oxygen. As fuel, it can be burned in gas turbines of local CHP plants, or in combustion engines of moving vehicles. But most favourably, it is converted directly to electricity in fuel cells. Anyway, the hydrogen economy is expected to use electrical machines more than the traditional fossil fuel economy. With hydrogen as energy source, the energy is favourably converted to electricity and then further to motion by electrical motors.

Using hydrogen makes probably the most sense in high-speed applications, because there the windage loss reduction pays off the most. This provides a nice efficiency boost, easily 1 – 2%. In turbo applications, where the load requires high speed anyway, switching from traditional low-speed motor and gearbox train to high-speed motor provides higher efficiency already despite the relatively high windage losses. If the windage is further eliminated, the total efficiency difference gets even higher. In such a case, would it be encouraging to switch to modern high-speed motor technology equipped with hydrogen cooling, and to carry the 1970s gearbox and DOL-motor to the melting pot?

If hydrogen is to be used in centralised heating, the old oil- or gas-fired CHP plants could be converted to hydrogen burning plants. The heat is made by the burning process and the power is generated by running the heat through a turbine, just like at the moment. However, hydrogen source is already there, together with detection systems and supply pipelines. The facility was ATEX-certified already with natural gas. Would it be encouraging to use the hydrogen also for cooling, to increase the power by 30%, and to power hundreds of households more?

Future vehicles, such as cars, buses, and lorries, may use hydrogen-powered fuel cells and electric drive trains. At the moment, these drive trains are powered by batteries. The motors are designed for very high power density. Size and weight are minimised, and even with the cost of some of the output power. The motors are really at their limits. The output power is often defined by the highest power reached at the test stand, not by the design power. Again, hydrogen system is already there. Would it be encouraging to increase the power density with hydrogen cooling and to make the motors smaller?

At the moment, many people see hydrogen as a risk. The first association in our minds is the airship Hindenburg disaster. Further, everyone says the costs of using hydrogen are too high. But are these cost estimates based on reality, or on fear? In 1940, Mr. Snell stated that the hydrogen-cooled machine was just as expensive to install than an air-cooled one [4]. If this was the case back then, why would it be different now?

Hydrogen cooling requires a complicated system around it. Hydrogen is a small molecule gas and leaks easily, so the joints must be very tight, and high-quality shaft seals are needed. Detectors must be used to observe any leakage. Hydrogen is explosive, so ATEX requirements need to be followed. In addition, hydrogen cooling requires a vacuum system, because all the air must be sucked out before the hydrogen gas can be injected. Finally, the hydrogen cooling loop needs to be pressurised to prevent air from flowing in. These do sound like expensive systems. On the other hand, hydrogen is not aggressive and sets no difficult specifications for material selection. Further, air-cooled machines have huge and inefficient heat exchangers, as large and loud as the machine itself. Hydrogen cooling could make these much smaller and more convenient. In addition, higher power from the same frame generally means lower costs.

Anyway, future hydrogen applications – regardless of the type – will bring the technology closer to our daily lives and generate more experience and knowledge on the gas and its applications. This should make us less afraid of it. As a result, the costs of all hydrogen system components in general will go down.

Finally, the benefits of hydrogen cooling are clear: more power and higher efficiency. This is what every customer wants. If the costs of all hydrogen systems are reduced by the spread of the Hydrogen economy, should it become affordable one day?

About the Author: Ville Sihvo